Restore/Synchronize Database
Version 3.1.8
- MediaMonkey Add-on -
by Zvezdan Dimitrijević
This add-on works with MediaMonkey v3.0-4.x. It could restore or synchronize (merge) the following data from/to some external (backup) database file:
- playing history (the Played table and Playcount + LastTimePlayed fields in the Songs table),
- playlists (auto-playlists and/or static ones in Playlists and PlaylistSongs tables),
- filters [MM3 db] / collections [MM4 db] and views (Filters, Views and NodeViews tables), and/or
- specified fields from the Songs table (e.g. Artist, Title or DateAdded field, however for some fields some another tables would be updated as well, e.g. Genres and GenresSongs if you specify Genre for restore).

If you have an adequate backup file, this add-on could be used as Undo tool as well. Let say that you have edited some tag/field in bunch of tracks and after that you have changed your mind. Nothing to worry: just select files that are affected, specify which tags you want to restore and the add-on will import that data from the specified backup file into the current database. Also, this add-on could transfer data from corrupted databases into the new, fresh ones in most cases.

Just double-click on the RestorePlayHistory-xx.mmip file; if you are on Vista or newer Windows and you got "Product installation error", make sure you have MM set to "Run as Administrator"; if you downloaded the installation package with IE and it changed its extension to a .zip, you should first change it back to a .mmip.

First of all, it is highly recommended that you periodically make a backup of the database file. You could use this add-on to make the backup or you could copy the database file by yourself - here you could find its location depending of the version of MediaMonkey and Windows.

The next important thing with this add-on is that it could restore data only from/to the backup (external) database file, but it cannot restore the current (active) database with itself. Which means that you need to have the backup file before you get some problem with the current database and nothing can be done if you don't have it.

This version of the add-on could import/export data only if there are tracks in the backup file that are matched with the tracks in the current database, i.e. if they have the same:
1. full path (folders\filename.extension) OR
2. checksum (made after click on Files To Edit / Duplicate Content) OR
3. filename with extension AND FileLength AND Album AND Year AND TrackNumber OR
4. path without drive letter, first folder & extension AND SongLength OR
5. filename without extension AND SongLength AND AlbumArtist AND Album AND Year AND TrackNumber.

The ExtraMatchTests key in the MediaMonkey.ini file determines which criteria will be used to match files between the backup and current databases (you can find more info about that key in the Additional INI keys section). These criteria are cumulative, e.g. if you choose the 4-th one, all previous testing will be executed before that one.

The 2-5. criteria cover situations with modified file locations after backup. The 4-5. criteria further cover situations with different media formats in the backup and current databases, e.g. if the backup database contains .flac tracks and the current one contains .mp3 tracks instead, but with the same filename, song length and other mentioned tags. The 2-5. criteria have the true condition only if there are exactly two matched tracks - if there are three or more tracks matched with those criteria, they would return the false condition and such tracks should have the same full paths to be considered as matched. 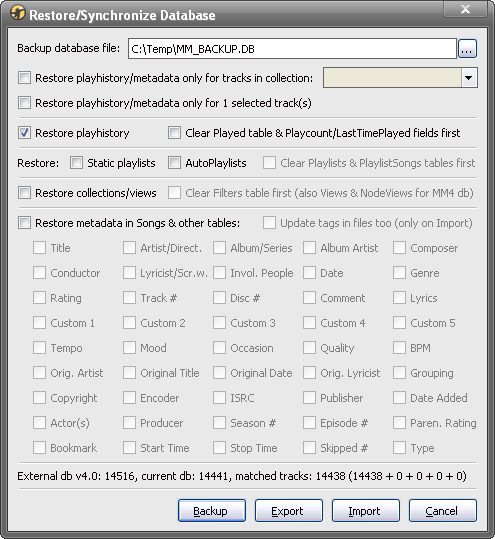 Immediately after you specify the backup file, the add-on will start comparing the backup with the current database and that process could be very slow, especially with the higher values of the ExtraMatchTests key . So, if you have a large database with too many records, it is recommended that you have specified the lower ExtraMatchTests value before you start the program. The remaining options in the dialog box determine which data will be restored and for which files.

If you turn on the option Restore playhistory/metadata only for x selected file(s) [MM4] (track(s) in MM3), data will be restored only for matched files that belong to the group of files that are selected in the main filelist.

Play history
The Restore playhistory option should be turned on if you want to restore the playing data in the Played table and the PlayCounter/LastPlayedDate fields in the Songs table for matched files. If you run this add-on twice with the same backup file, and if you choose this option again, it will not add the play history twice - the add-on will compare those data from the backup and current database files and if they are same it will skip them, i.e. it will add (merge) only the new playing data.

However, if you turn on the option Clear Played table & Playcount/LastTimePlayed fields first, the add-on will remove all playing data from the Played table for matched files from the target database before restoring them from the source database. Also, the PlayCounter/LastPlayedDate fields in the target Songs table will be based only on the data from the source database in that case. So, be careful when using this option.

Metadata
You could restore the selected metadata for matched files if you turn on the option Restore metadata in Songs & other tables, in which case the add-on will update Songs table and other tables that are connected to it by related fields, e.g. Artists or Genres.

The option Update tags in files too (only on Import) allows updating of tags in media files for the corresponding metadata in database on Import. If you forget to turn on that option, but you want to have updated tags in files as well, after restoring of metadata in the database, you could choose the Synchronize Tags option of the program.

The remaining check boxes on the bottom of the dialog box allow you to choose which particular metadata you want to restore, e.g. Date Added, Artist...

The [RestorePlayHistory] section of the MediaMonkey.ini file contains some less used options that are not represented with GUI: