Export/Create Playlists
Version 4.1.1
- MediaMonkey Add-on -
by Zvezdan Dimitrijević
This add-on works with MediaMonkey v2.x-4.x. It has two operation modes, manual and automatic. In the manual mode it allows batch export of playlist files (M3U/ASX/XSPF) or creating of playlists for each child node of the node selected in the tree panel. This works with almost all nodes, even the Magic Nodes. For example, if you select the Playlists node, you could export playlist files for all playlists stored in the Library. In the automatic mode this add-on periodically saves specified playlist node and/or its sub-nodes from the Playlists branch.

Playlist files/playlists could be saved in a hierarchically organized folders within the specified parent folder, using the same structure as sub-nodes of the selected node, or could be saved in a single folder using a specified string as separator. Playlist files could be saved in ANSI, UTF-8 or Unicode, while M3U files could have simple or extended format. Track paths could be URL encoded and stored absolute or relative to the playlist's path using Windows "\" or Unix "/" folder separator. If the relative path option is turned off, the paths stored in playlist files would be same as they are in the Path field of the database, but could be also replaced with the user-defined replacement, e.g. "c:\Documents and Settings\" could be replaced with "e:\My Music\". Paths that you want to replace could be specified using Regular expressions.

This add-on also allows copying of audio files, export of M3U nodes from My Computer branch (e.g. conversion of M3U files) and export of the selected node or selected tracks only. 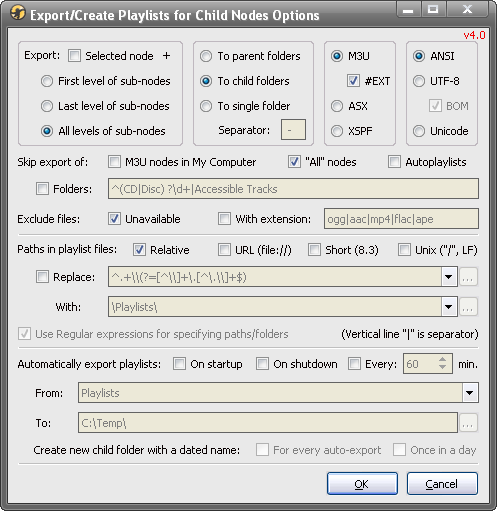 This add-on has three main modes of work: manual and automatic export of playlist files and manual creation of MM playlists. The manual operations could be started from the menu, while the automatic mode is working in the background on a timely basis that is set in the Options dialog box.

The commands of this add-on are located in the Export/Create Playlists sub-menu in the File menu and the context menus of the Media Tree, the main filelist and Now Playing panel.

The Export/Create Playlists add-on could export list of media files to the playlist file(s) using some of the Export commands from its menu, or it could add list of media files to the MM playlist(s) using the Create Playlists for Child Nodes command from the menu. The Export commands could be seen as an extension to the built-in Send to / M3U/XSPF playlist menu command, while the Create Playlists command could be seen as some kind of extension to the built-in Send to / Playlist menu command.

The commands in the File menu and the context menu of the Media Tree could be applied on the node selected in the Media Tree panel, using them you will get exported/created playlists for the selected node and/or its sub-nodes (depending of your settings in the add-on's Options dialog box). The following commands are available: